Situation: Rob, an ESL student, had developed a reputation. During the past two terms, he tended to come to his classes late every day and turn in assignment late or didn’t do them. The quality of his work was so poor that he failed his Level 3 Writing course twice and was about to start his third time in it. It was the beginning of a new term, and as a program coordinator, I was asked for advice by Rob’s new Writing teacher about how to work with him.

In their book, Switch: How to Change Things When Change Is Hard, Chip and Dan Heath discussed an interesting approach that could help teachers redirect their ESL students like Rob. The approach is called Solutions-Focused Therapy (SFT).

I decided to try this approach with Rob when I met with him after his class. In SFT, there is an assumption that there is an exception to every problem. In Rob’s case, we assume that there was an exception to his coming to class late and doing poor work. The exception would be a class in which he had come on time and performed well. Once we can identify that class (the exception to the present problem pattern), we can analyze it like a game film of a sporting event. We can replay it to see where things were working well. What was happening? How did he behave? How did he feel?

In my meeting with Rob, we had a conversation something like this:

Me: Tell me about a class that you’ve had when you usually came on time.
Rob: I always went to Ms. Sandy’s class on time.
Me: What do you think was different about Ms. Sandy’s class?
Rob: She’s nice.
Me (Trying to get more specifics.):What did she do that was nice?
Rob: She always said hi to me when I came to class. Other teachers kind of ignored me when I arrived.
Me: That is nice. Did she do anything else that you liked?
Rob: After she told us our assignments, she often came to my desk and asked me if I understood it and if I needed any help.
Me: Did you tell her if you were confused?
Rob: Yes. And sometimes she gave me a different assignment to help me.  I liked that.
Me: What did you do differently in her class from your other classes recently?
Rob: I always came to class on time. And I think I understood the assignments better and did them.
Me: How did you do in her class?
Rob: I think I did well. I passed it.
Me: Do you think that you could do the same thing that you did in Ms. Sandy’s class in your Level 3 class this term?
Rob: I think maybe I can come on time. And I can ask for help if I don’t understand.

After my conversation with Rob, I talked with his teachers. Although a couple of them said that it would be difficult to change the structure of their class to appeal more to Rob, they all said that there were some things that they could now do knowing what has made him feel successful in the past.

A few weeks later, I found out that he had started to come to classes on time and seemed to be more serious about the assignments.

In his Writing class, he actually moved from the back of the room to closer to the front. His Writing teacher realized that he was feeling overwhelmed by having to write 2-3 pages essays, so she helped him just focus on the day-to-day individual assignments that eventually culminated in complete essays. And each class, she occasionally checked back with him to make sure he understood the assignments clearly.

I met again with Rob and mentioned the positive comments that I had heard from his teachers and asked him what he had been doing differently. He said that he’d been doing his assignments instead of just wasting time. I asked him why he had made this change, and he said that he had decided that he really wanted to pass his classes. 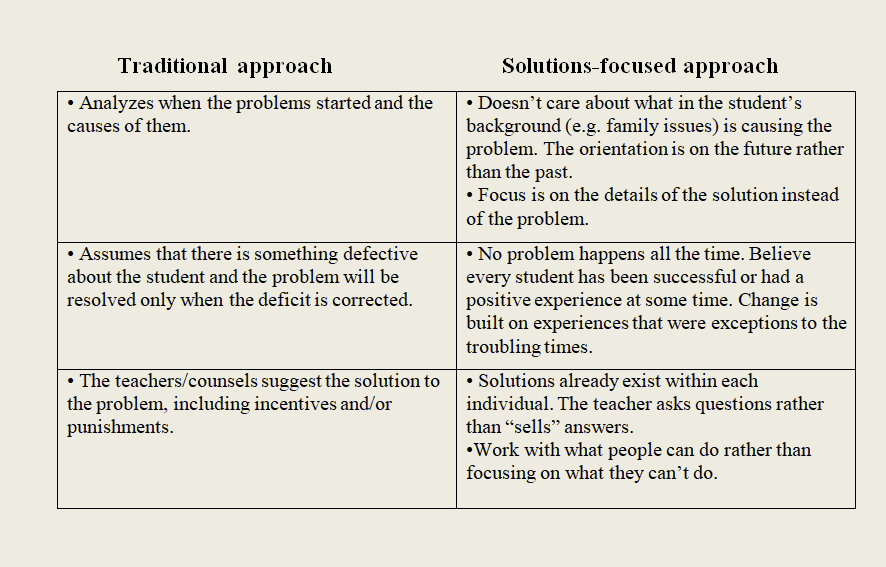 Situation 1: Allan’s routine was to walk into class five minutes early, cellphone in hand, sit down at a desk, and start read texting. He set the phone down as the teaching started to explain the day’s assignment, but as soon as she clicked on a PowerPoint, Allan’s eyes went back to his phone, and he started scrolling.

Traditional approach: Teacher asks Allen why he is always playing with his phone. She threatens to punish him if he continues.

Solution-focused approach: Teacher asks Allan to tell her about a class in which he felt very focused. What was happening in that class? How did he feel?  Where was his phone? Where did he sit?

From that positive experience, the teacher leads Allan to decide how he could deal with his phone in this class. The teacher also realizes that she, herself, needs to avoid looking at her phone during the class.

Situation 2: Naomi and Alisa, as best of friends, always sat next to each other. When the teacher asked students to pair-up with a classmate or get into groups of three or four, Naomi and Alisa always were together. Unfortunately, they tended to chat and laugh with each other in these situations instead of seriously working on the assignment.

Traditional approach: Teacher assigns them to sit in different seats.

Solution-focused approach: Talking to them separately, the teacher asks first Naomi about classes that she liked in which the class did group work. Who was in your group? How would you rate your interest in the class and groups?

Naomi suggests a couple of options that she could follow during group work. The teacher also realizes that it would be helpful to assign students to groups or to count off to form groups rather than have students choose their own.

Situation 3: Jay hated doing the assignments for the class, so he often did the minimum that he could get away with.

Traditional approach: The teacher told him that he would lose points for poor work or get extra point for good work.

Solution-focused approach: The teacher asked Jay what class he is able to do his best in, and they talked about his approach to assignments in that class. In what way is that class or teacher different from other classes/teacher? Where do you sit in that class? How would you rate your interest in that class relative to other classes?

Jay suggested that he could put extra attention and energy to half of the items on an exercise and usual attention to the other half.  Also, the teacher realizes that she needs to explain more clearly to the whole class how each assignment is connected to a specific skill that will help the students in the near future.

On a positive note, one of the best things about teaching ESL is that we rarely confront the more serious behavior problems that mainstream teaching have to deal with. But, as the saying goes, “When one finger is sore, the whole hand hurts.” In other words, when one student is “off,” it can distract our attention from all the others. I have found the solution-focused approach as a relatively quick, positive and effective way to help those rare students make an adjustment, and it often helps me see where I can fne-tune my own teaching.

Some related posts are:

• No Need to Show Anger or Frustration at ESL Students

• Most Important Tool for Classroom Management (Case two and Caveat)