This posting is an update of a post from September 2019: Mistake: He surprised to see it snowing. (Adjectives that look like verbs)

Back in my high school days, learning my first foreign language, French, I remember often hearing the teacher say, “You’ll just need to memorize this.”

Fortunately, the art of teaching foreign languages, including ESL, has come a long way from those “just memorizing” days. We understand the importance of comprehensible input and the effectiveness of engaging with new concepts and vocabulary in multiple contexts.

To illustrate this, I’d like to refer to a posting from 2019, in which I discussed a common mistake that ESL students make with adjectives that look like verbs. Instead of telling students that they need to memorize these words, we lead them to internalizing these though a series of four exercises. By the end of these, students tend to remember because the words“sound” right rather than wracking their brains searching for what they had been told.

When students see an –ed at the end of a word, they tend to automatically assume it’s a verb, and this assumption can lead them to grammar mistakes.

(* mistakes—These sentences are missing a verb.)
*Kai embarrassed during his speech.
* Rumi interested in horses.

To help students in the most efficient manner, I will sometimes paint with a broad brush.  So I simply tell my students that these words are adjectives: surprised, embarrassed, confused, interested and shocked. They need a verb with them.

(correct): Kai was (v) embarrassed (adj) during his speech.

It’s true that those words can be can be used as verbs, for example:
– It embarrassed (v)  Kai that he forgot some of his speech.

But in all my years of teaching writing, I rarely see students use them that way. They almost always use them as adjectives, so I don’t waste their time/mental energy talking to them about using these as verbs. Instead, I just generalize and tell them that they are adjectives.

Four-step exercises to teach these to students (Handout included.)

END_OF_DOCUMENT_TOKEN_TO_BE_REPLACED 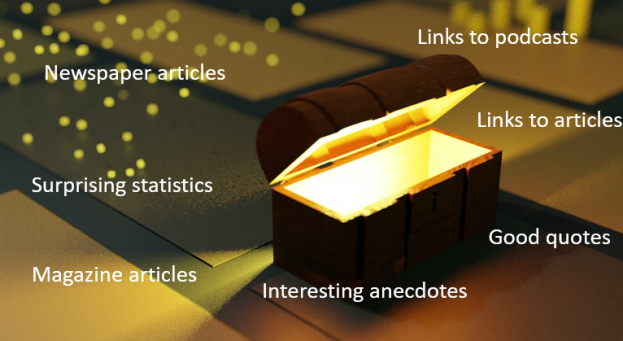 I wanted to encourage my Writing students to include information from their own country to support their ideas in their essays. If done well, this kind of information can be very enthralling for anyone who reads their papers. (See • The Huge Advantage International Student Writers Have Over Their American Classmates )

The problem was that, when they tried to do this, the information was often too general, which made it sound kind of trite. So, I decided to write an exercise in which they would see how effective detailed information could be.

For the exercise, I wanted to juxtapose weak short paragraphs with few details to strong ones with more , and then have students identify each type. The challenge for me was to come up with stimulating content for these short paragraphs.

Fortunately, I had a treasure chest filled with interesting content that I could draw from. And as I’ll demonstrate below, this treasure chest has been my go-to place when writing materials for all the other skills too.

Here is what is in my treasure chest.

END_OF_DOCUMENT_TOKEN_TO_BE_REPLACED

This posting is an updated version of a post from November 2016: Writing Class: Dealing with Plagiarism (Don’t Take It Personally)

In October 2016, Tiffany Martínez, a Latina student at Suffolk University in Boston, was accused of plagiarism by her sociology professor in front of the entire class. Huffington Post plagiarism story   What caused him to be suspicious?  The word “hence.”  On her paper, he circled the place where she had written the word “hence” and wrote in the margin, “This is not your word.”

In my many years as an ESL instructor, I’ve witnessed instructors over-reacting in suspected plagiarism situations.  It seems as if those instructors were taking it personally, feeling like they were being disrespected.  Too often instructors seem to see it as a “gotcha” opportunity.

Here are some options depending on the situation.

END_OF_DOCUMENT_TOKEN_TO_BE_REPLACED

Having three levels of students in one classroom can be overwhelming. But for a reading-skills or writing-skills course, it seems relatively do-able because students can work individually on the reading or writing tasks.

However, for a conversation course in which students need to be interacting with classmates, it’s impossible right? No, it’s definitely possible.

Here is how it has been done successfully with a user-friendly approach for the teacher and with students developing their skills as they would in a single-level class.