A student, Tim, once came to my class all excited and asked me, “Hey David, wha ya gonna do di wee-en? I wanna gedouda taw.”

I was pretty sure that he was trying to say something in English, but I had no idea what it was. After repeating the sentences several times, he became embarrassed and decided to write them down. “What are you going to do this weekend? I want to get out of town.”

He told me that the teacher in his previous class was doing lessons on reduced forms of speaking and had encouraged them to use them when speaking. So this student whose pronunciation was often hard to understand because he tended to drop final consonants of words (e.g. wee = week / taw = town) was being encouraged to do something that would make him even harder to understand.  Crazy!

How to work with reduced forms. (Handout exercise included)

END_OF_DOCUMENT_TOKEN_TO_BE_REPLACED

This game has it all:

Here is how it works.

END_OF_DOCUMENT_TOKEN_TO_BE_REPLACED

This activity is not only great for skill building, but also offers an opportunity for students to be creative.  It’s also very entertaining and a complete change from other activities that students usually do in class.

After students have done the TPR (Total Physical Response) activity which I had describe in Part 1 , Taking TPR to Another Level of Involvement: Two Fun Lower-Level Activities (Part 1: Triads) they’ll be prepared for this one, “Movie Directors.”

In brief, these are the steps and the handout.

END_OF_DOCUMENT_TOKEN_TO_BE_REPLACED 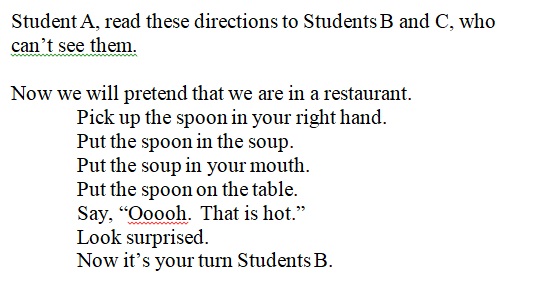 This activity will show how TPR (Total Physical Response) can be more student-centered than the traditional teacher-directed approach.  Also, it is a pre-step to the TPR activity “Movie Directors,” which I’ll share in the next posting .

In this activity, students are put in groups of three (Students A, B, C).  Each member is given a paper with different “commands.”  They read their commands to their partners, who listen and do the actions.