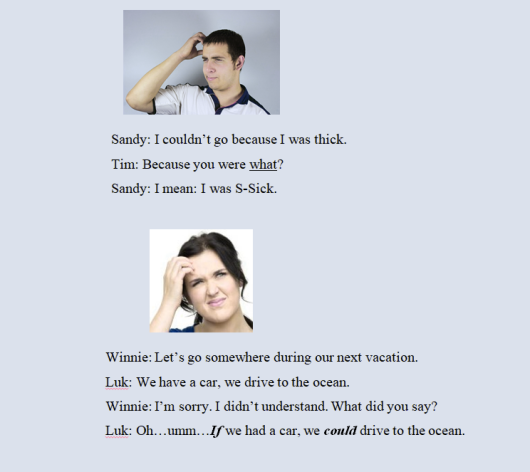 A former ESL student of mine, Teddy, came to my office for a chat. I asked him how his classes were going, and he showed me the mid-term exam grade from his intermediate-level speaking class that his teacher had just given him. 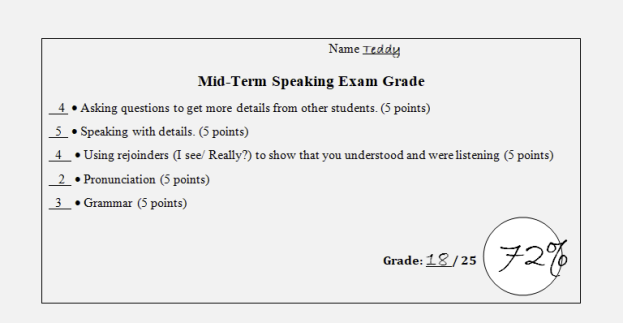 I asked him how he felt about it. He said that he was feeling discouraged because he really tries to be active in conversation, not only telling his ideas and opinions but also responding to and including other. So he felt that he deserved a much better score than a 72%, which was a failing grade.

Then I asked him, from looking at this grade form, what he thinks he’ll need to do to improve his grade.

He felt confident that he could ask more questions and try to respond to others more with rejoinders.

But about the pronunciation and grammar grades, he said that he wasn’t sure.

He imagined that he might have some problems with “L” and “R” sounds.  And he thought that the grammar score was low because he always makes mistakes with prepositions. So he planned to think more carefully about those when talking.

The problem and the fix

This is what commonly happens when students are “punished” with lower points for grammar and pronunciation.

Conversation question: Where was your favorite vacation?

Joanne 1: My favolite … favorite vacation is …was …was …when I went …went to Hawaii.
I was sixteen year old … sixteen yearS old.

This choppy response can be explained by Krashen’s Monitor Model.  Joanne is continually editing her speech because her teacher, through feedback, has indicated that grammar and pronunciation will be evaluated in conversations.

Now imagine that Joanne wasn’t overly monitoring herself and said this:

Joanne 2: My favolite vacation is when I went to Hawaii. I was sixteen year old.

Comparing Joanne 1 and Joanne 2 above:

What to give points for on Conversation Evaluation forms 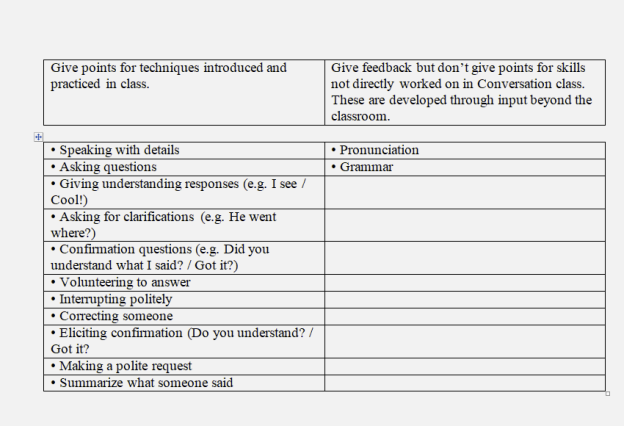 The two most effective, non-threatening techniques for students to help each other become aware of their pronunciation and grammar when they cause communication breakdown.

I overheard this conversation between two of my students:

Rose: What city would you like to visit some day?
Eddie: I hope I can visit Rondon next summer.
Rose: Rondon? Where is that?
Eddie: I mean London.

Notice that because Rose asked for a clarification, Eddie became aware of his pronunciation mistake and made a conscientious repair.

In this conversation below, Tami makes a grammar correction after her classmate, Tod, asks for clarification.

Tami: My brother was working for a software company in Seattle.
Tod: I see. Where does he work now?
Tami: Sorry. I mean, he has been working in Seattle. He’s still there.

For practice with asking for clarifications, see
Another Conversation Activity: Listen to Partner and Ask Questions to Complete Information-Gap Chart
Conversation Activity: Stimulating Students to Listen and Respond to Each Other
Customized Speaking/Listening “Game” (Actually, more than just a game.)

In the conversation below, Brian, who knows that his pronuciation can sometimes cause confusion, asks a question (Do you understand?) to make sure Gina could understand his pronunciation.

Brian: I heard that we won’t have class on Friday because our teacher has a poi-men. Do you understand?
Gina: I’m sorry. Our teacher has a what?
Brian: A-point-ment. He has an appointment.

For practice with eliciting confirmation at intermediate levels, see

The reasons why these two techniques are so effective in improving pronunciation and grammar.

The vast majority of students above the beginning levels have the ability to adjust their pronunciation and repair their grammar during a conversation. They just need a reason to do it.

If they want to be understood by others, they will apply their knowledge about pronunciation and grammar naturally without hesitations when they become aware that there is a grammar breakdown.

On the other hand, when they are know that they will be getting a grade for their pronunciation and grammar, they will become overly concerned about and monitor every word they say. Thus, their speaking will become choppy.

Practicing pronunciation sounds whole class is not a good use of time.

In a typical class (beyond Beginning level), for any given sound, only one or two students (at most) will struggle with it and not be able to adjust it when they realize that it is causing a communication breakdown.  Thus, it can be an abuse of students’ time if they are forced to work on pronunciation sounds that they have already mastered during class.

Instead, the teacher can help those few students become aware of the specific sound and then either work with them individually, recommend a tutor to work on it or refer them to a software program.

For example, instead of penalizing Teddy with a lower grade, the teacher could have added a comment with a specific example and recommendation. 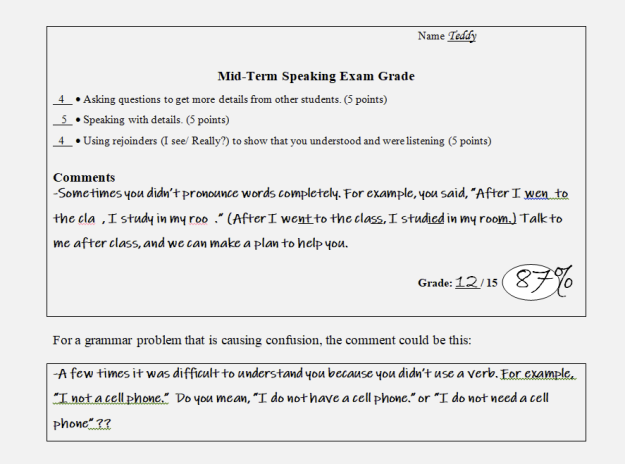