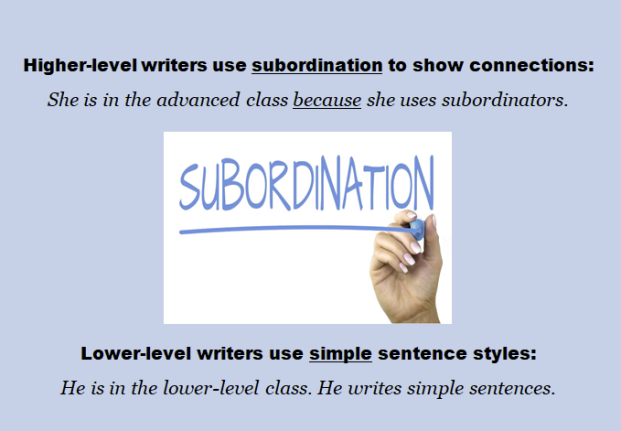 My students are always quite surprised when I tell them this true story about subordination*.  Several years ago, I taught Academic ESL at the University of Wisconsin-Stevens Point (UWSP).  I had discussions with the chair of the English Dept. about how they determine which students (American and International) are qualified to take English 101 Composition.  Not surprisingly, he said all new students write a placement essay.  But this is the surprising part: the readers/evaluators do NOT consider the idea-development, nor the paragraph organization, nor the grammar.   Instead they looked for only one aspect: whether or not the writer could use subordination (dependent and independent clauses) correctly.   Their research found that that one aspect was the most reliable predictor about which students would be successful in English Comp.

Why subordintors are so important

The reason why subordinators are so important is because they help the writer write more deeply and explain complex ideas more clearly.   They show how ideas are related.  The English Dept. at UWSP found that students who could write using subordination on their placement essays would be able to successfully write about the more abstract topics that are dealt with in English 101.

In the Academic ESL program at my college, we have used subordination as an aspect for placement throughout our program and for promotion from one level to the next.  Lower-level writers are more apt to rely on simple and compound sentences (for example, using coordinators such as and, but, so, or)

Students at the higher levels tend to include more subordinators and have fewer mistakes with them.  Also, they will include more than one subordinator in a sentence, for example, While I was running a marathon, my leg muscle started to tighten up because I hadn’t drunk enough water.

I’ve been involved in ESL placement essay evaluation processes at several colleges.  In some, the readers filled out a multi-item rubric for each writer.  These can be not only very time consuming but also mentally intense for the reader.  And to include these reliably in the evaluation process, it’s necessary to spend time on a pre-reading norming procedure to make sure all the readers are in sync.  However, this whole process can be greatly simplified, more accurately and much more user-friendly if the focus in primarily on subordination.

In Part 2,  (Subordination Part 2) I’ll share a set of exercises that have proven effective in helping intermediate and advanced students challenge themselves to use subordinators to write more sophisticated ideas.  In Part 3, (Subordination Part 3) I’ll show an inductive approach to this for lower-level students.

*Subordination involves writing dependent and independent clauses with subordinators such as:

after, although, because, before, even if, even though, if, since, that, though, unless, until, when, where, whether, which, and while.

*About the free-download materials. During my 40 years of teaching ESL, I have had many colleagues who were very generous with their time, advice and materials. These downloads are my way of paying it forward.