Dan nervously flipped through a magazine as he waited for the other passengers to get into their seats.  Soon, a very large man sat down in the seat next to him.  His shoulders were so wide that they pushed Dan’s elbow off the arm rest.  The take-off and first 20 minutes were smooth.  Dan lowered the tray in front of him and set his lunch and coffee on it.  Suddenly, the passenger in front of him decided to push her seat back, shoving Dan’s tray into him, spilling coffee all over him.  For the rest of the two-hour flight, he tried not to think about how miserable he felt in his tiny seat and wet shirt.

Most people like stories.  And essays that start with a story are often the easiest to enter.  Like these written by a couple of students:

“A few months ago, in the middle of the night, when I was staying at home, I heard my house’s gate was shaken violently by someone.  There, I saw a woman who was carrying her baby, standing with panic and asking for help. …”

“The 40-degree Celsius weather was miserable when we were going on the trail to my grandmother’s house in Bucaramanga, Colombia.  We had been traveling about seven hours and were in El Pescadero, which is the curviest and dizziest part of the trip. …

These dramatic introductions are not only enticing for the reader, but they are also fun for the students to write; it gives them a chance to use their imagination and creativity.

At the same time, a good dramatic intro isn’t just a story.  There are three characteristics of especially good ones:

The first time I tried to teach this technique, I used a deductive approach.  This meant I started by telling them what the three characteristics are and then showed them some examples before assigning them to write one.  This was not an effective approach.   Many students didn’t actually include a story; some had little action; others started theirs with several sentences giving background information.

As a result, I changed to an inductive approach.  Before assigning them to write their own, I had them analyze eight introductions and choose the correct “dramatic introduction” descriptors for each.  Below are the eight descriptors and a sample introduction to analyze. 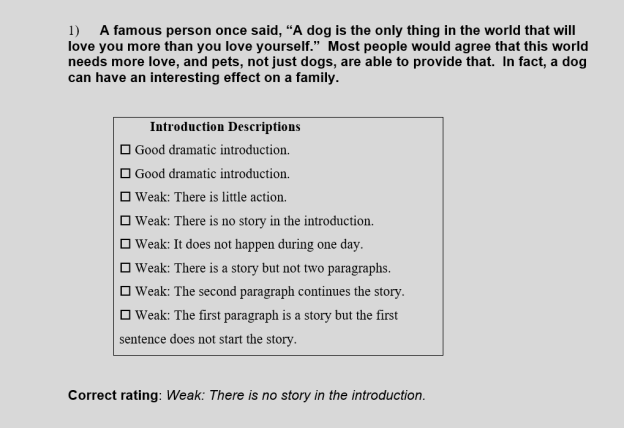 By doing this, I was able to circumvent the types of “mistakes” many of them were apt to make when they wrote their own.  The quality of ones the wrote were much better than the ones written after learning deductively.

I’m attaching the activity here. Handout Dramatic Introductions .  Feel free to try it out with you students.

For more writing exercises that take an inductive approach, see

*About the free-download materials. During my 40 years of teaching ESL, I have had many colleagues who were very generous with their time, advice and materials. These downloads are my way of paying it forward.