A former ESL Writing student of mine was quite surprised by her English Comp class.  She told me that her instructor isn’t concerned about the grammar in his students’ essays. At the same time, a common complaint by academic instructors heard around the campus at that college was that their (American) students had many grammar mistakes in their academic papers. In fact, the grammar skills of the students coming out of the English Comp classes were so weak that the Business Department decided to offer business writing courses that would deal with these grammar issues.

I decided to pursue this further by interviewing several English Comp instructors. In response to my question, “Why don’t you work with grammar in your courses,” I heard this, “Focusing on grammar will stifle students’ ability to write.”  In a college newspaper, an instructor explained, “An exaggerated focus on grammar stops the development of engaging and complex ideas.”

That sounds like a straw man argument. Yes, if an instructor assigns a paper and tells students that they would write one draft and that their grade would be based on the quality of grammar in their paper, then students might overly focus on that rather than their ideas.  But what professional instructor would do that?

END_OF_DOCUMENT_TOKEN_TO_BE_REPLACED 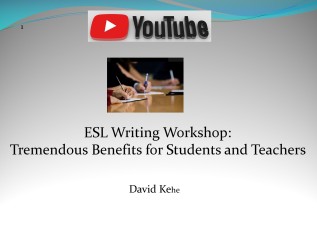 In this YouTube video, I describe the Writing Workshop Approach to teaching ESL writing skills. This approach has been successfully used by a large number of teachers. Some of the many benefits include motivating students by giving them autonomy and allowing teachers to conference one-on-one with students during the class time rather than outside class.

Here is a link to where you can read more about the steps in the workshop approach and find a specific model lesson plan with free downloadable exercises/activities.

END_OF_DOCUMENT_TOKEN_TO_BE_REPLACED

I learned an important lesson from one of my Writing class students. I originally thought that AJ was a pretty good writer, but the grammar on her second essay was a disaster. In class the next day, I showed her paper to her with all the grammar mistakes coded and asked her if she was surprised by them. With a look of embarrassment on her face, she said she wasn’t surprised because she hadn’t taken enough time to edit her paper.

This story about AJ is connected to a common myth about marking grammar on students’ papers: Students will feel discouraged if they see that they have a lot of grammar mistakes. Contrary to this myth, when I’ve asked students, “Do you want me to mark every grammar mistake on your essay or only the most serious errors?” I have found everyone has responded, “I want you to mark them all.”

(See Myth: Students Don’t Like to See Red Marks on Their Papers for more about my survey of students’ attitude.)

However, the idea of marking all the grammar mistakes can present a dilemma for us Writing teachers. Are we just enabling students like AJ by, in essence, becoming their personal editor when, in fact, they could have found the majority of those mistakes on their own had they taken the time to proofread the essay?

This is how my experience with AJ changed how I approach marking grammar on essays.

END_OF_DOCUMENT_TOKEN_TO_BE_REPLACED

I recently put my students in small groups, gave them a list of sentences and asked them to identify which were incorrect and to correct those. Several of the groups either thought that this sentence was correct or believed that there was something wrong with it but couldn’t correct it:

Surprisingly, these were advanced-level students who were stymied by this. In fact, when they asked me to explain the problem, some of them asked me, “Are you sure it’s wrong? It sounds right to me.” I imagine that the reason for their confusion is because they are familiar with the pattern of Subject + Verb + Object:

Actually, this is not a difficult grammar structure for students to learn, even lower level students. Basically, I tell them that after certain verbs, they should write “that” + subject + verb.  (Technically, the word “that” is optional, but to keep it simple, I tell them to write “that.”)  Although the formal term of this structure is “noun clauses,” I don’t expect them to remember that. If they can remember which verbs are followed by this structure, they’ll be fine.

These are some examples of this kind of mistake: